A high yielding wheat which provides a safer option for dry sowing is part of AGT’s new variety offering for Australian growers.

Over recent years a substantial portion of Australia’s wheat crop has been planted dry, and in many instances germination of these crops has been delayed due to a later than anticipated season break.

“Growers are continually looking for earlier sowing options that don’t compromise on yield,” he said.

“A variety like Catapult is a great choice for dry sowing because it maintains its high yield over a wide range of germination dates, including well into May where it remains competitive with the benchmark variety Scepter.

“In fact, Catapult may be viewed as a ‘longer season’ Scepter, allowing growers to achieve Scepter-like yields when sown in late April.

“When sown towards the end of April, Catapult has taken longer for heads to emerge relative to Trojan and Scepter, but that accelerates when it is sown in May.

“We believe growers are likely to be able to plant Catapult a week earlier than they would plant Scepter, with this planting window extending well into late May, offering great flexibility to growers.”

When sown around ANZAC day, Catapult has consistently out-yielded Trojan, Magenta, Cutlass and Yitpi, as well as other varieties used in this sowing window.

“The very high yield potential of Catapult relative to other varieties has been recorded across a large range of growing conditions and environments, highlighting its very wide suitability for most cropping programs,” Dr Edwards said.

“Catapult is an exciting development for the wheat breeding team at AGT.

“Sometimes in breeding, you get unexpected but very exciting results. Out of a standard Mace cross, Catapult has emerged as an exceptionally unique combination of features that we believe will help growers increase productivity, while providing flexibility that has not been available previously”.

Catapult is also one of the best choices for use in wheat on wheat rotations due to its disease risk profile.

“Apart from Catapult, there are no other wheat varieties that combine this maturity type with cereal cyst nematode resistance, yellow leaf spot resistance and AH quality,” Dr Edwards said. 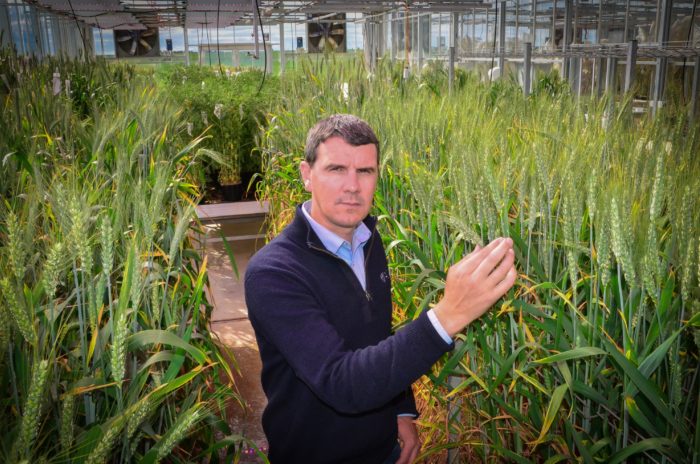 Wheat breeder Dr James Edwards is excited to see what Catapult can do on farm in season 2020.

AGT National Marketing Manager Dan Vater said Catapult’s wide adaptation will mean it can fit the front end of most growers’ cropping programs and be utilised as a second wheat in a rotation, a practice very common in low-rainfall environments.

“Our team are excited to offer Australian growers this new variety”.

Commercial quantities of Catapult will be available through AGT Affiliates, or local retailers.