An initiative first developed by AGT, Seed Sharing™ is a licensed farmer to farmer seed trading scheme, making it easy for every grain grower to enjoy access to AGT varieties. 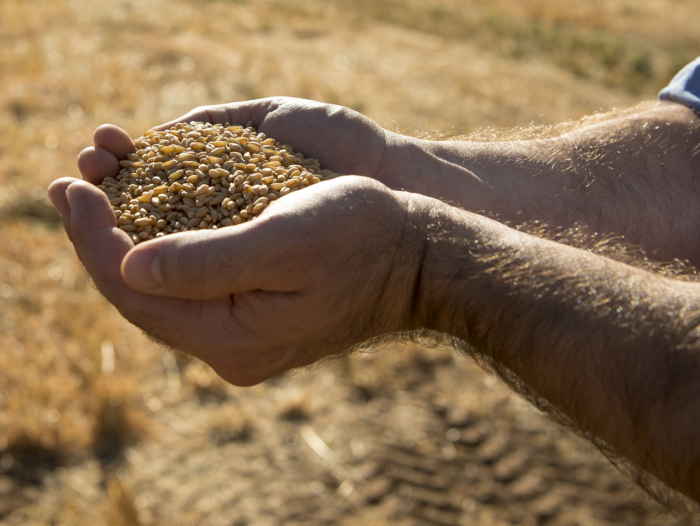 With ever increasing input costs pressuring farmers across the country, Australian Grain Technologies (AGT) are encouraging and promoting Seed SharingTM as a low cost way to diversify, update or simply try something different in their cropping programs in 2017.

An initiative first developed by AGT, Seed SharingTM is a licensed farmer to farmer seed trading scheme, making it easy for every grain grower to enjoy access to AGT varieties.

With only one simple form to fill in and return to AGT, a farmer can sell seed they have grown to another farmer for use the following growing season, at a price or arrangement negotiated between them.

“Seed SharingTM is just one of the ways that AGT are supporting farmers to improve their productivity and create a strong, vibrant agricultural industry,” said Dan Vater, General Manager Marketing & Seed Production.

“AGT want to see farmers growing the best possible varieties for their cropping program and this is a way to make the latest genetics available at an affordable price.”

“Traditionally, the option for Seed SharingTM of AGT crop varieties has been utilised well in South Australia and Western Australia. We believe that the eastern states also have a great opportunity now to review their cropping programs and trial newer genetics in 2017.”

Seed SharingTM is allowed in all states of Australia for all AGT wheat, triticale and durum varieties except Clearfield® Plus wheat varieties and End Point Royalties are not charged on seed sold through Seed Sharing.

Farmers who are wanting further information on varieties suited to their cropping program are encouraged to speak to their regional AGT Marketing & Seed Production manager about their options. To source seed through Seed SharingTM, farmers are encouraged to look locally, ask neighbouring farmers, check in local newspapers or on social media for available seed. Commercial seed is also available through AGT Affiliates and supply will be monitored and reported on by AGT regularly in the lead up to the growing season.

To learn more about Seed SharingTM or download the relevant forms please visit agtbreeding.com.au/sourcing-seed/seed-sharing or contact the AGT End Point Royalty Office on (08) 8313 6810.

Tim Brosnan, a farmer from Biloela in central Queensland, offered Seed SharingTM of his Mitch wheat to neighbouring farmers in 2016 and plans to do so again in 2017. Available from commercial growers since 2015, Mitch has a unique combination of high yield and improved crown rot and leaf disease resistance, making it a potentially more profitable late April/early May planting alternative to EGA Gregory and LPB Lancer for many northern growers.

“I think participating in Seed SharingTM is a simple process. AGT have a simple reporting process for the transaction, supplying us with the relevant paperwork for both the grower and the farmer purchasing the grain. All we have to do is fill it in and post it back,” said Mr Brosnan.

“We get a greater profit for a portion of our grain than selling direct to a bulk handler and save on End Point Royalties.”

Andrew Mitchell, a farmer from Mintaro in the mid north of South Australia, is Seed SharingTM Scepter this year, following its release to market in 2016. Scepter is a Mace replacement type wheat, with an improved yield and disease resistance package and is expected to become the leading wheat variety over the next few years.

“I find Seed SharingTM really simple as a seller, with a straightforward form supplied by AGT the only paperwork required to participate,” said Mr Mitchell.

“The purchasing grower gets a huge advantage buying seed through Seed SharingTM as well, as they are able to source seed locally at a much lower cost than commercial seed. This means they can adjust their cropping programs more easily to ensure the best genetics are being grown broadly on farm only one year after they become available.”

Ian Shields, from Dookie in Victoria, is Seed SharingTM Scepter this year, following its release to market in 2016. Scepter is a Mace replacement type wheat, with an improved yield and disease resistance package and is expected to become the leading wheat variety over the next few years.

“I like Seed SharingTM as it gets varieties into farming programs quickly. Instead of a farmer having to buy a tonne of seed and spend a year bulking up, they can buy bigger quantities from a neighbour who has done this for them and sow larger areas to begin with,” said Mr Shields.

“Another key benefit of Seed SharingTM is how it provides farmers with flexibility to adapt to seasonal conditions and sowing windows. If something crops up during a planting window and you need to change your program, you can access other varieties through Seed SharingTM that may not have been a part of the original plan but are more suited to the current situation.”

Ty Fulwood, a farmer from Meckering in central wheatbelt of Western Australia, is Seed SharingTM Scepter this year, following it’s release to market in 2016. Scepter is a Mace replacement type wheat, with an improved yield and disease resistance package and is expected to become the leading wheat variety over the next few years.

“Seed Sharing TM is great for farmers because they can get greater quantities at a lower cost, implementing it into their programs quicker,” commented Mr Fulwood.

“If you look at the ability for farmers to increase yield by 5-10% across their entire program over only one or two years, instead of the time and expense of having to bulk up seed themselves, it is a more efficient way of increasing farm profitability.”

Ian Sutherland from Coleambally, NSW has been growing Suntop since 2013 and sells seed to multiple local farmers. Suntop has been a main season staple variety for New South Wales growers since its release in 2012. Suntop is a high yielding, APH quality variety underpinned by a good disease resistance profile making it a valuable option for growers.

“The ease of the Seed SharingTM process is a big plus, with minimal paperwork and minimal fuss,” said Mr Sutherland.

“Seed SharingTM gives us the option to on sell eligible AGT varieties at a premium and we save on EPRs.”

John Pattison from Marrar, NSW began growing Beckom in 2015 and is selling seed through Seed SharingTM to local farmers this year. Beckom is a newly released, main season variety that has shown high and stable grain yields and great adaption to NSW. Beckom has an AH quality classification and is underpinned by a solid disease package, aluminium tolerance and displays a short, conservative plant height for increased harvest speeds and ease of stubble management.

“After two seasons of growing Beckom wheat, this variety is now firmly established in our cropping program. Beckom wheat has a good package for our district and over the past two seasons has produced outstanding yields,” said Mr Pattison.

“We are able to grow a new variety on our farm and neighbours can see over the fence how the new variety stacks up against our current variety in the same paddock. They are then able to source seed from the next door farm”. 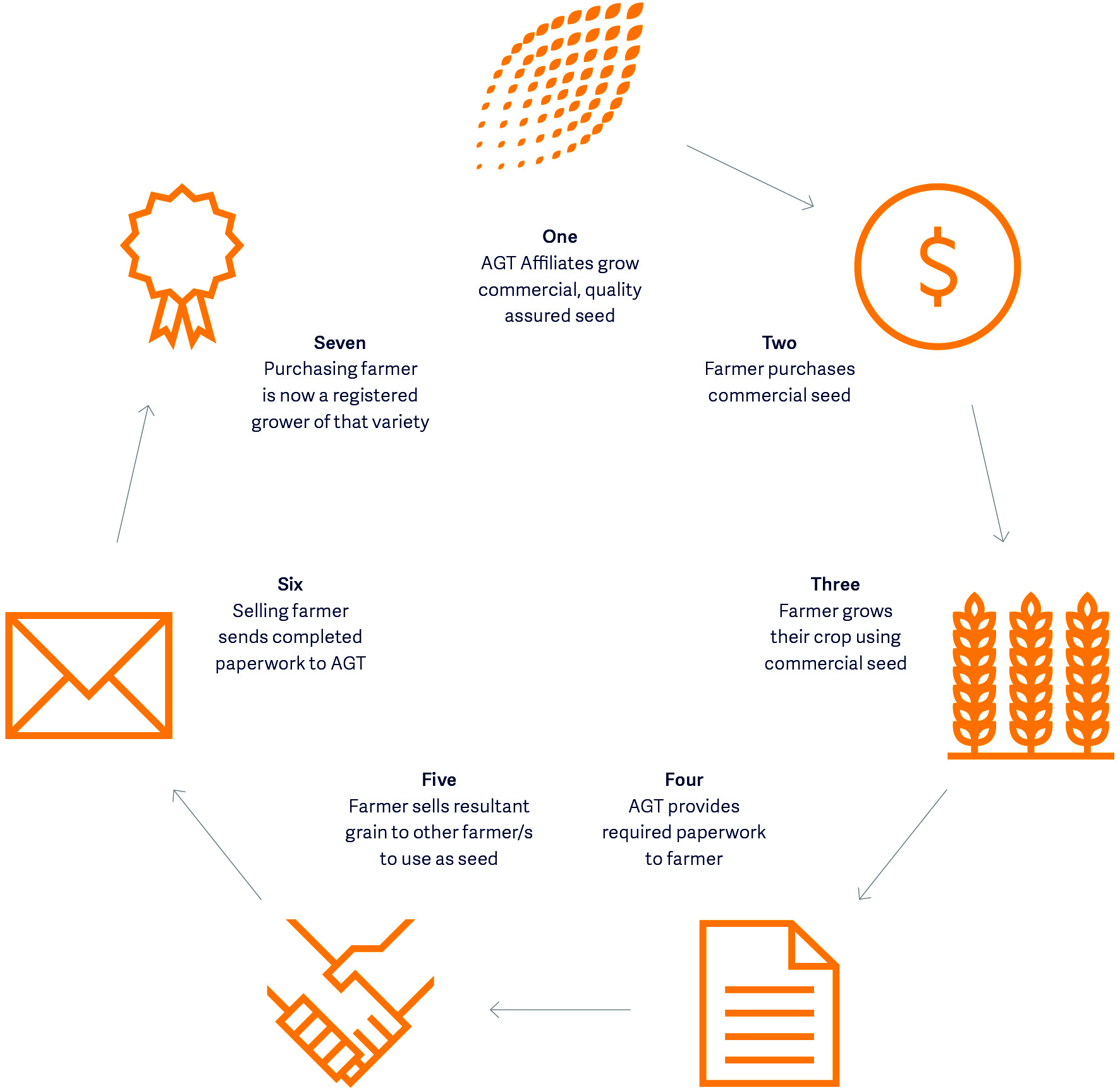