Australian Grain Technologies (AGT) is excited to appoint Alana Hartley to the role of Marketing Manager for Western Australia.

Alana will be based in Northam at AGT’s Western Field Crop Breeding Centre and is an excellent addition to a growing team, bringing a wealth of skills in grain trading, agronomy, trial management and extension work. 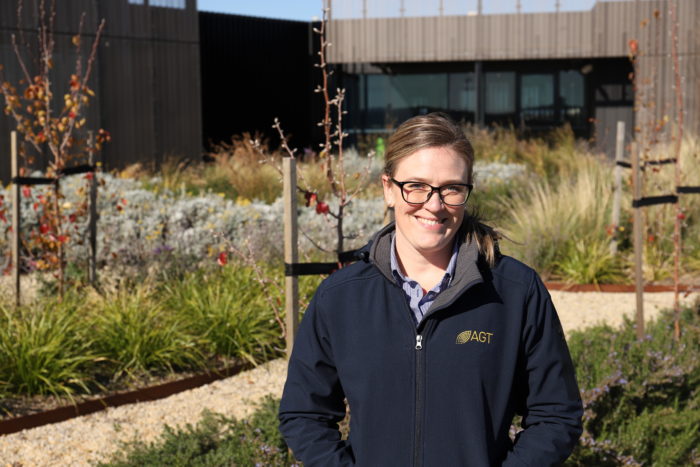 The role is an important one within AGT, with Alana to manage a territory that produces approximately a third of Australia’s winter crop tonnage.

Alana will be covering a lot of ground, from Geraldton to Esperance and everywhere in between, with her main focus being on the promotion and technical support of AGT’s wheat varieties, as well as the impending release of AGT’s first narrow-leaf lupin variety for WA.

A career path driven by a thirst for knowledge has seen Alana work within a variety of agricultural sectors after graduating from Curtin University in 2012.

She did work experience as a grain marketer after graduation before working as a field agronomist for Landmark for three years.

A burgeoning interest in export oaten hay then drove her to work in, and learn more about that industry.

Her interests then developed in the science behind agronomic recommendations, stemming from trial work and research, and this led Alana to the Liebe Group where she worked as a research and development coordinator, conducting research projects and industry trials.

Alana began her role as Marketing Manager for AGT in WA in late May.

“The diversity in this role is what attracted me, and the chance to help shape AGT’s breeding objectives not only in wheat, but also other crops like lupins, barley and canola” she said.

“I’m excited to be helping our breeders identify grower requirements, to developing new varieties that are going to yield more, have better disease resistance and have the agronomic features growers want in their varieties. It has already been eye-opening to see just how much time and effort goes into developing better varieties for growers.”

“From a marketing perspective, I’m looking forward to going out and educating the WA grains industry about what we do here at AGT, as well as helping farmers choose the right varieties for their situation so they can maximise their returns.”

AGT Marketing and Seed Production General Manager Dan Vater said the company was glad to have Alana join the ranks.

“We are very excited to welcome Alana to the growing AGT team,” he said.

“Alana is a great fit for the company and will perform an important role for us in Western Australia.”

“Alana brings a great deal of skills and enthusiasm not only to the marketing team, but also to the Northam breeding team.”