A new winter wheat from Australian Grain Technologies (AGT) is primed to establish itself in the high-rainfall zones of southern Australia with growers expecting impressive yields.

Anapurna’s potential was clearly demonstrated in trials conducted at Millicent, SA, as part of the Foundation for Arable Research Australia (FAR) Hyper Yielding Cereals Project, funded by the Grains Research and Development Corporation (GRDC) where it yielded more than 10 tonnes per hectare in 2019.

At Weatherboard in southern Victoria, Ben Findlay is growing 2 hectares of Anapurna for seed production and is hoping his crop will also reach the 10t/ha mark.

“We weren’t able to plant the Anapurna until the third week of April, which is a bit later than we would have liked, but it has still done very well,” he said.

“The later start meant it trailed our RGT Accroc for most of the season, but it has really caught up in the last few weeks.

“There’s nothing between them now.” 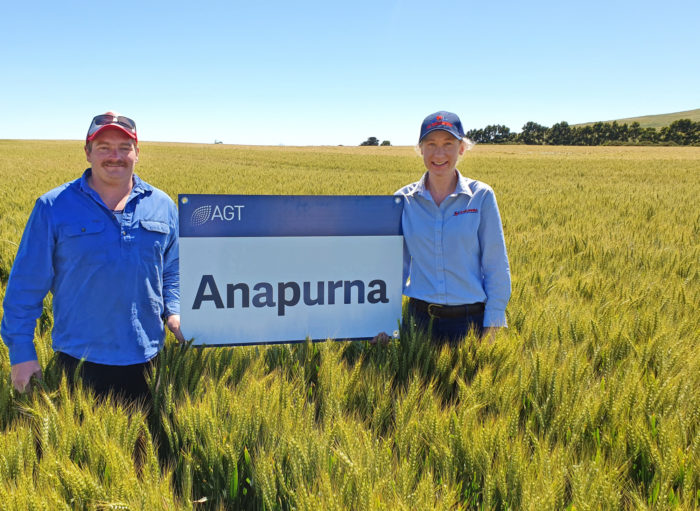 Anapurna is a European variety and was identified by AGT as an ideal slow winter wheat for the softer, higher rainfall areas of Australia’s southern wheat growing region through a variety exchange with European breeding co-operative and AGT shareholder Limagrain.

The variety offers desirable traits for high-yielding situations, including excellent resistance to lodging and resistance to stripe rust and septoria tritici blotch.

Anapurna is a fully awned variety with red grain, meaning the grain is suitable for feed markets only.

A strong vernalisation requirement means the variety can be safely planted in early April. It also offers a long vegetative growth phase that provides a wide grazing window.

While Ben chose not to graze his Anapurna, he is still very happy with the potential return.

“The growing conditions have been good, from sowing into moist conditions through to a wet spring, although rainfall was low in mid-winter,” Ben said.

“Even the later planting hasn’t held it back and I’m really looking forward to seeing what the yield monitor says on the header.

“We’re waiting on the yield data to finalise next season’s program, but the signs are looking very good.”

Anapurna is available through AGT Affiliates for 2021 sowing.