New wheat variety 'Beckom' promises to provide growers through southern NSW, Victoria and South Australia with a very high and stable yielding, AH quality option to include into their 2016 cropping program.

Dr Eastwood highlights that Beckom's adaptation pattern makes it an ideal fit for growers in medium rainfall areas of southern NSW, Victoria and South Australia. Beckom has a good disease resistance package including CCN resistance; it produces high relative test weights, and offers tolerance to both boron and aluminium toxic soils, whilst not being highly susceptible to either pre-harvest sprouting or blackpoint. These features combine to make it a relatively low risk variety that can deliver high returns to growers.

Beckom has an AH quality classification in both the South Eastern and Southern classification zones of Australia. While from time to time premiums offered for APH may be large enough for some APH varieties to achieve similar returns, on average we would expect greater average returns from Beckom due to its superior grain yield.

Beckom's mid season maturity means that it reaches head emergence around the same time as Suntop, and three days later than Mace, therefore fitting a planting window from the beginning to the end of May.

On acidic soils, particularly in association with wet conditions, aluminium toxicity is a common limitation; including in the sub soil where it is almost impossible to correct via lime application. Wheat varieties like Beckom with moderate tolerance have a good capacity to minimise the adverse effects of aluminium toxicity; an issue which can impact large areas throughout south eastern Australia. 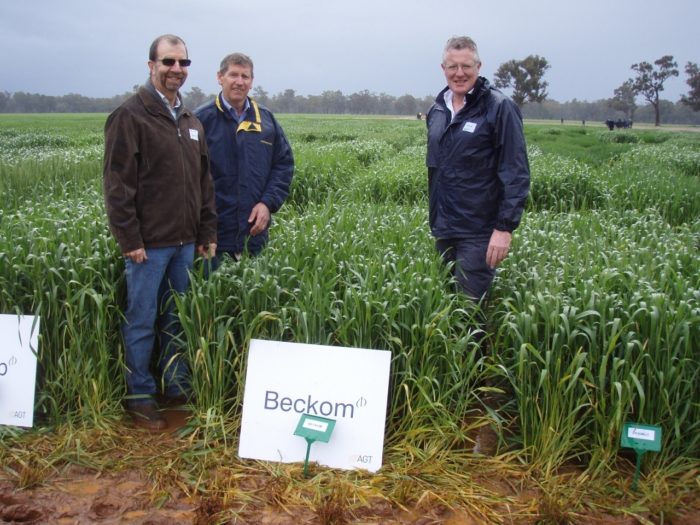 Mike O'Hare and his late father Phil have hosted wheat variety trials on their property near the town of Beckom in the south west of NSW for NSW DPI, GRDC, NVT and AGT continually since the 1950's, a long period of service to Australian wheat growers. The variety name was chosen to honour and acknowledge the family for their contribution to the Australian wheat industry.

Commercial quantities of Beckom will be available through AGT Affiliates and local retailers for the 2016 season.