A new dual-purpose, high yielding APH wheat is the first variety to be launched out of AGT’s recently established winter breeding program based at Wagga Wagga. 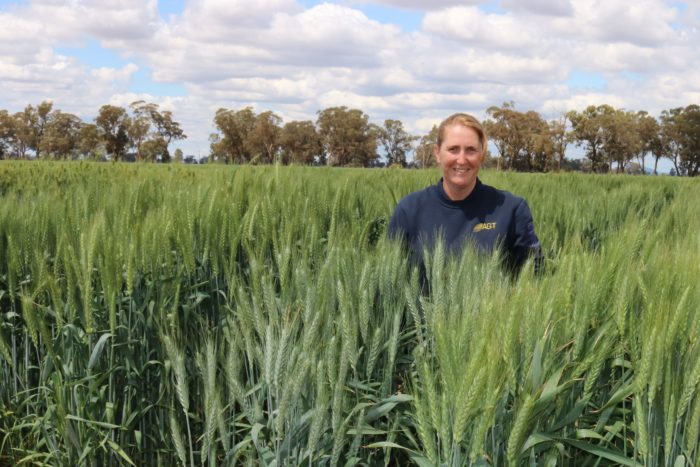 Recently launched Illabo (tested as V09150-01) is the first variety to come out of AGT’s dedicated long season and winter wheat breeding program at Wagga Wagga, which was released to benefit the mixed farming sector.

Dual purpose wheats offer many benefits to farmers in a mixed enterprise, and EGA Wedgetail has been the variety of choice for many seasons now.  Illabo was bred with the specific intention to offer cropping and livestock farmers an improved version of EGA Wedgetail, which is the main parent of Illabo.

The variety has already attracted significant interest from farmers given its potential to produce significantly higher grain yields than EGA Wedgetail, while maintaining dry matter production.

“From central NSW down to Victoria, mixed farming plays a big role in many businesses, so to provide a high yielding winter wheat that allows for both grazing and high quality grain production is really exciting,” said AGT Marketing Manager, James Whiteley.

“Southern NSW has been the traditional home of dual purpose wheat that is why we made the strategic decision to create a dedicated winter and long season wheat breeding program, and base it in the region. However, the use of longer season wheats that you can plant early is starting to gain in popularity, and Illabo should have a fit for many growers not just in southern NSW, but through Victoria, into SA and even parts of WA.

“The initial cross was made with the intention of improving on Illabo’s major parent EGA Wedgetail and it has stood out in our trials as having higher yield potential while producing equivalent to slightly increased dry matter.

Winter and long season wheat breeder Britt Kalmeier commented “We are pleased to have our first variety from this program out there finally, and also for it to be such a good variety with strong attributes that will add increased value to farm businesses.

“Importantly, we have gained an APH quality classification for southern NSW, while receiving an AH classification for Victoria, SA, WA and the northern region (northern NSW/QLD). This means that growers can sell grain from Illabo crops into the maximum quality grades possible, while also realising feed value throughout the season by grazing.

The early sown NVT trials from across southern NSW have shown Illabo to be the highest-yielding alternative to EGA Wedgetail, outperforming it by seven per cent and producing eight per cent more grain than other alternative, Kittyhawk.

The new variety was launched on 10th October at Hart Brothers Seeds Annual Spring Field Day at Junee Reefs. Hart Brothers, an AGT Affiliate, have been taking orders for a number of weeks, such is the interest in the new variety.

The variety name honours the town of Illabo north-east of Junee, which has a strong mixed farming history.

Commercial quantities of Illabo seed will be available for the 2019 season through AGT Affiliates and local retailers.