AGT have launched its first narrow-leaf lupin variety Coyote, offering growers in Western Australia a variety with high and stable yields across a range of conditions.

Coyote (tested as WALAN2546) is the first narrow-leaf lupin variety to be released by AGT, selected out of the advanced germplasm from the WA Department of Primary Industries and Regional Development (DPIRD), which ceased developing new lupin varieties.

AGT took over the DPIRD lupin breeding program – the largest in the world – in 2016 and appointed new lupin breeder Dr Matthew Aubert to its Northam, WA, facility in May.

Dr Aubert said the team was very excited to be releasing Coyote, which is a stable performer across a number of environments.

“As lupins are a significant crop in WA and play an important part in the rotation, we agreed to take on the lupin germplasm from the DPIRD breeding program, with the vision of breeding even more productive and profitable varieties for WA growers,” he said.

“Compared to market leading variety Jurien, Coyote has been slightly higher yielding, but we believe its true value is in its yield stability, performing well across a very broad range of soil types, rainfall zones and yield potentials.”

Dr Aubert said yield stability has been a major driver behind AGT’s decision to release Coyote.

“The variety is widely adapted throughout WA lupin growing regions,” he said.

“It is metribuzin tolerant and offers similar maturity to Jurien but slightly later than Mandelup. It also offers yields similar to current varieties but is a higher yielding alternative to Jurien and Mandelup.” 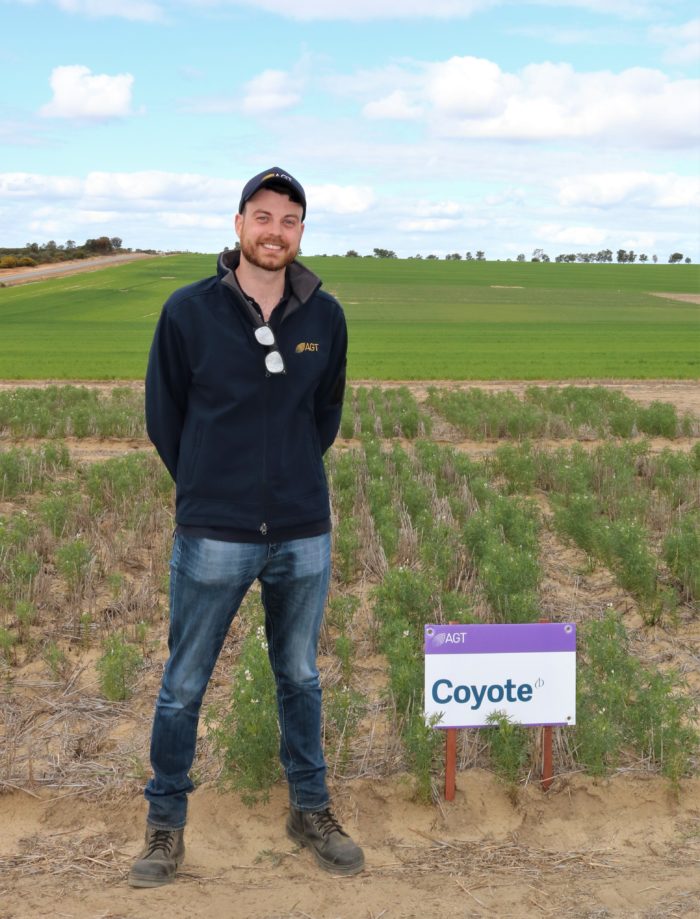 AGT Marketing Manager Alana Hartley said this is an important milestone for the AGT team.

“We are keen to demonstrate to growers that by taking on the breeding program we are dedicated to the future of lupin breeding in Australia,” she said.

AGT’s lupin breeding program – which involves around 20,000 plots each year – has a focus on capitalising on lupin’s high protein content while delivering strong yields.

“We are working to provide growers with the highest yielding varieties available, and we look forward to working with growers to integrate this variety into their rotations,” Ms Hartley said.

“We hope growers remember the catchy name too. Coyote is the first in our series of lupin varieties that will be named after Western Australian goldmines. The Coyote gold mine is located in the Tanami Desert in WA’s north east.”

Commercial quantities of Coyote will be available through AGT Affiliates or local retailers.