A new variety of wheat will give farmers the opportunity to sow later in the season without compromising yields. 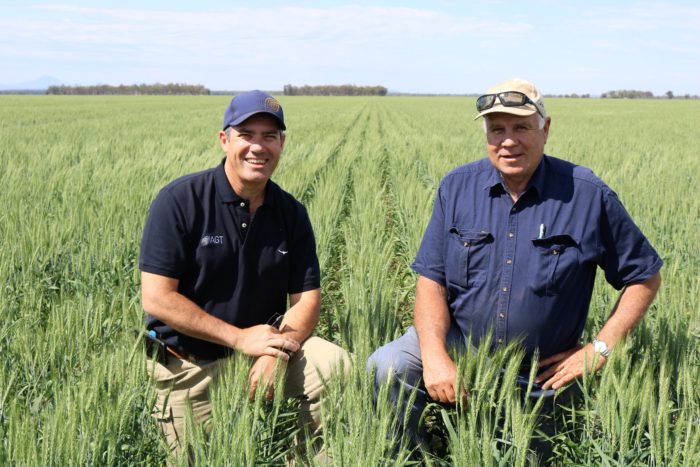 Developed by AGT’s Narrabri program, Sunprime is an early maturing APH wheat, similar in maturity to Spitfire, Sunmate and Mustang, making it well suited to short seasons where sowing occurs from mid-May onwards.

This is particularly valuable in circumstances where increased risk of heat stress and below average spring rainfall may limit yield potential in slower maturing varieties.

NVT yield data and long term AGT yield data has shown that Sunprime has achieved grain yield 6-10 per cent higher than Spitfire across NSW and Queensland regions, while proving adaptable even under tough conditions.

“Given the season we have had in 2018, farmers may be going in to 2019 looking for quick-maturing varieties like Sunprime that provide strong results,” said AGT Marketing Manager, Douglas Lush.

Another favourable trait possessed by Sunprime is helpful tolerance and resistance to soilborne diseases, including root lesion nematode and crown rot – both of which tend to have bigger impacts in tough seasons.

“Official ratings have not been released yet, but AGT have assessed Sunprime’s tolerance to root lesion nematodes (P. thornei) as moderately tolerant, and moderately susceptible-susceptible for crown rot. These preliminary observations may help to explain why Sunprime has shown great adaptation in the northern region,” said AGT wheat breeder Meiqin Lu, based in Narrabri.

Sunprime was launched at the Plant Breeding Institute Field Day in Narrabri in September and again at the GrainGrowers’ Gala Dinner held to celebrate the organisations 60th anniversary in Dubbo on October 17. Mr Lush said that he was excited to be able to launch the variety with the support of GrainGrowers.

“It really is an honour to be able to recognise the impact that GrainGrowers Limited have had on Australian wheat production, particularly the development of the Australian Prime Hard classification grade, with the release of Sunprime.”

Seed of Sunprime will be available for 2019 through AGT Affiliates and local retailers.