Wheat growers who reaped the benefits of moving from Mace to Scepter in the past will be able to take another big step forward from next season.

Australian Grain Technologies has announced the commercial release of Calibre , describing it as a ‘Scepter replacement’.

AGT wheat breeder James Edwards says what Scepter was to Mace, Calibre is to Scepter.

“Calibre will allow growers to take the next step forward in performance and productivity with its elite yields, wide adaptation and improved disease resistance,” he says.

Calibre is derived from Scepter and offers the significant advantage of a longer coleoptile.

“Coleoptile length defines how deeply you can plant the seed, so a longer coleoptile offers advantages for planting deeper to access a receding water profile or ensuring germination if the furrow gets filled by wind or rain events,” Dr Edwards says.

“It can also be an advantage for separating the germinating seed from a pre-emergent herbicide application.”

Calibre is a quick-mid maturing variety with head emergence coming a little sooner than Scepter, and will suit all areas that have previously grown Scepter, from Western Australia, through South Australia and Victoria, and into southern NSW.

It has an AH quality classification in these target areas, with a sound physical grain quality package.

In AGT’s long term advanced trials series in South Australia and Victoria, Calibre out-yielded Scepter in 26 of the 29 head-to-head assessments, achieving almost 6% higher yields than Scepter. Over the border in Western Australia in the same trialling program, Calibre beat Scepter in 20 out of 27 trials, or around 4.5% over-all.

“So far, our trials have indicated better genetic resistance to powdery mildew than Scepter, Ballista and Vixen,” Dr Edwards says. 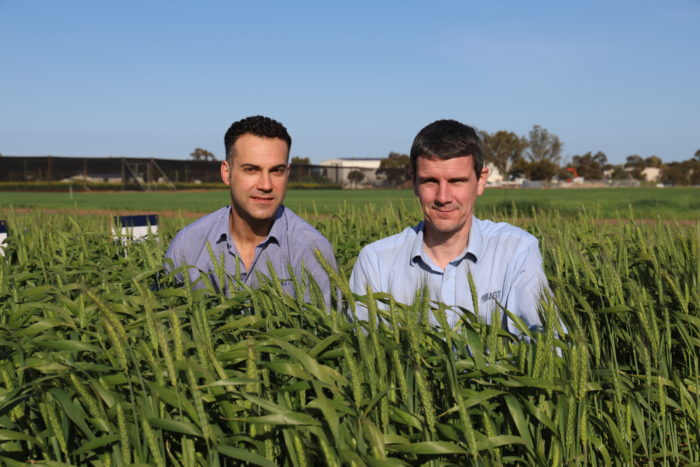 CEO Haydn Kuchel and wheat breeder James Edwards are excited to see what the future holds for new Calibre wheat.

AGT CEO Haydn Kuchel says the company is excited about being able to offer growers another significant improvement in their profitability.

“AGT is all about using our scientific tools and ag experience to develop varieties that help growers thrive,” he says.

“We think we achieved that with Mace and again with Scepter, and we are proud to offer something of real value to growers with Calibre.

“Plant breeding can be a long process – but we get a kick out of seeing our work make a difference on farm.”