Developed by AGT at its Narrabri breeding centre in north west NSW, Suntime will give NSW and Queensland growers an earlier sowing option that offers higher yield potential and improved disease resistance.

Suntime was officially launched at the University of Sydney Plant Breeding Institute field day at Narrabri, on Wednesday 9th September 2015.

AGT marketing and seed production manager Kerrie Gleeson said Suntime had largely been developed as a replacement for the popular variety Sunzell.

"Suntime is a little bit quicker than Sunzell. The advantage over Sunzell is it has an APH quality classification in the Northern Zone, whereas Sunzell is only AH; and Suntime has proven to be significantly higher yielding than Sunzell in late April planted trials", he said.

"It is about delivering better yields and a better disease package. It has good stem, leaf and stripe rust resistance and moderate tolerance and resistance to root lesion nematode".

In National Variety Trials (NVT) from 2010 to 2014, Suntime consistently outperformed Sunzell in grain yield and many disease resistance traits at sites from central Queensland to north west NSW.

Mr Gleeson said Suntime's optimum sowing window was from 25th April to mid May, but is best suited to planting in the last week of April and first week of May in the north.

"We believe the excellent package of yield, maturity, disease resistance and APH quality classification should make Suntime a clear choice when picking a variety for the ANZAC day planting window", he said. 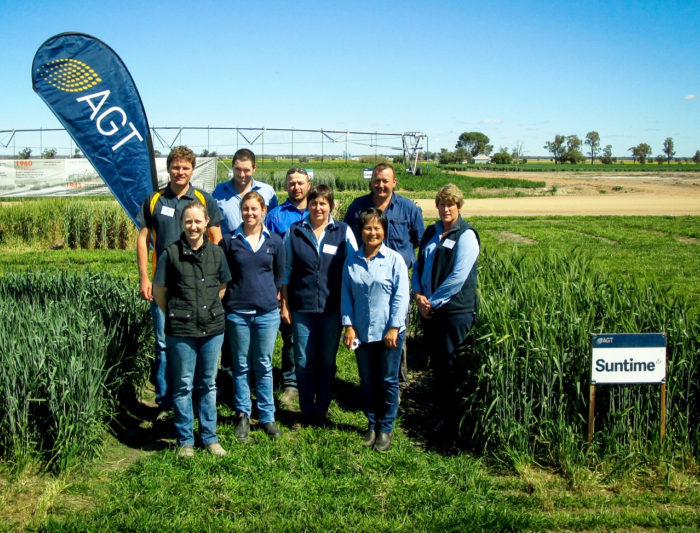 A 230 hectare seed increase block of the new variety planted this season on the Woods' family's Goondiwindi farm, 'Billa Billa', is up and growing well.

"We are watching it with interest. It looks magnificent", Tom Woods said.

"It appears to be a variety that the industry is looking for, that you can plant around the end of April/early May. There are a lot of mid season varieties, but we are looking for a genuine ANZAC day planting option and Suntime looks like it will fit that space".

Commercial quantities of Suntime seed will be available for the 2016 through AGT Affiliates and local retailers.