Wheat growers of Western Australia will have a choice of two new high-yielding Australian Hard (AH) varieties for next season, Sting and Hammer CL Plus.

NAG committee member Ben Cripps, who presented his 15-hectare demonstration block of Sting to field day attendees, said the new variety was performing well on his property so far.

“We had a difficult start to the season with very little subsoil moisture and the Sting was sown dry on 10th of May,” he said.

“The opening rains were preceded by 10 hours of 80-plus kilometre per hour winds, which were fortunately followed by a good 20 millimetre fall.”

“It has grown very well since germination and is looking great.”

“High yield and AH-quality means Sting will be an excellent quicker maturing complement to the leading variety Scepter in WA cropping systems,” she said. 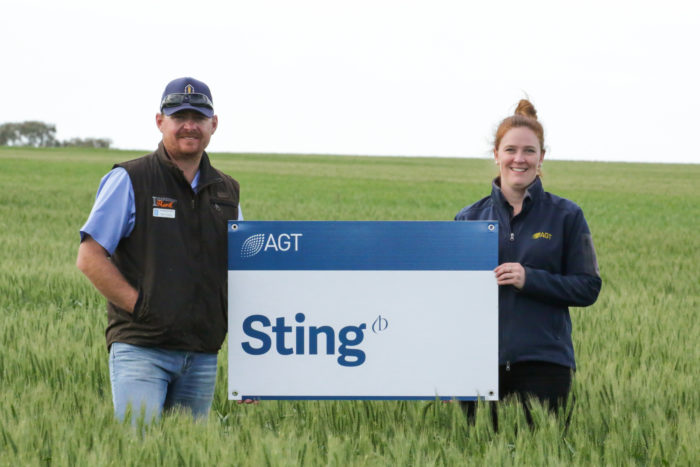 Ms Hartley said AGT’s second release of the year, Hammer CL Plus, offered high yields and AH-quality for growers along with the Clearfield® production system.

“We believe that Hammer CL Plus offers more to growers than other Clearfield® varieties. For the first time, WA growers have access to an AH quality Clearfield® variety that is competitive for yield,” she said.

Closely related to Mace, Hammer CL Plus has a similar sowing window and quick-mid maturity, making it ideal for Western Australian conditions.

Hammer CL Plus also has one of the best disease resistance packages of any Clearfield® variety, including moderate resistance to yellow spot, making it suitable for wheat on wheat rotations.

“Both Sting and Hammer CL Plus can be ordered from AGT Affiliates now, ready for the 2021 season,” Ms Hartley said.

Find out more about Sting for WA here

Find out more about Hammer CL Plus for WA here